Survey Shows 4 Out of 5 People Deterred By ET Fees

People are being put off holding unfair employers to account by too high fees and a lack of awareness about support, Citizens Advice has found.

Regional Secretary Tim Roache commented, “The region has now grown for 7 consecutive years at a time when working people in particular are facing increasing attacks from a hostile ConDem government and unscrupulous employers. Those out of work and seeking employment are commonly retaining their membership for when they are succesful in gaining work. This all demonstrates the value of union membership whatever the right wing press might have you believe. It’s never been more important to be a GMB member.”

GMB commented on reports that the Low Pay Commission is split on whether to recommend uprating the national minimum wage by 50p per hour to £7 per hour from October 2014 to make up ground lost to inflation since 2006.

Road Maintenance Budget Only Half Of What’s Needed Says GMB

The government is being penny wise and pound foolish as money saved not fixing potholes leads to much more serious damage that can only be fixed at a much higher cost later says GMB, the union for highway maintenance workers, commenting on the announcement by Department of Transport that £6 billion will be spent on maintaining and improving local roads in the six years between 2015 and 2021.

All GMB offices in the region will be closed from midday on 23rd December 2014 and reopen on 5th January 2015.

For any urgent employment related issues please contact your local workplace representative or branch official. For any urgent legal matters please call Unionline on 0300 333 0303 but please note that any administrative matters or enquiries will be referred back as they are unable to deal with these matters.

The regional secretary, Tim Roache, all full time officers and staff wish you all the best for the festive season and a happy, healthy and prosperous New Year.

As we reach the festive season and the promise of a brighter year in 2015 GMB continues to campaign for a better future for our members and their families. The continued growth of GMB this year, up by nearly 10,000 shows the ever growing reputation of a union fighting for its members and for the social justice so many in the United Kingdom are denied. GMB local and national representatives have won pay rises and working improvements despite political and management opposition. 2015 will show that more workplaces will refuse to accept living standards being cut or threats to job security.

Talks have been continuing with the police employers during the preparation for our industrial action over the 2014 pay dispute. In order to enable these positive talks to continue, UNISON, Unite and GMB have asked the employers to extend the period in which we can call industrial action to the end of January. This extension has been agreed, and as a result we have agreed to withdraw the industrial action scheduled before Christmas.

Blacklisting came to light when in 2009 the ICO seized a Consulting Association database of 3,213 construction workers and environmental activists used by 44 companies to vet new recruits and keep out of employment trade union and health and safety activists. Talks between GMB and lawyers representing construction employers (Balfour Beatty, Carillion, Costain, Kier, Laing O’Rourke, Sir Robert McAlpine, Skanska UK and VINCI PLC)  on a compensation scheme for 3,213 blacklisted workers broke down in June over the amount of money being put into the scheme by the employers. Employers have unilaterally launched a cut price scheme GMB estimates will cost less than 2% of the combined profits of the eight construction firms.

GMB Christmas Jumper Appeal for Save The Children 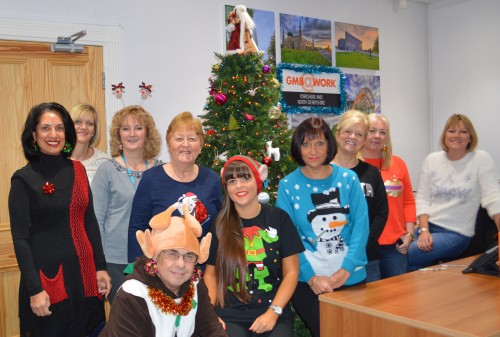 By 9.10am this morning staff and officers at GMB’s Wakefield office had raised £75 for the Save the Children Christmas Jumper Appeal, just by wearing a Christmas jumper and making a small donation to a fantastic cause.  And it’s not too late to spread the ‘jumper joy’ and donate a few quid!!  You can donate through the region by simply sending a cheque made payable to GMB (don’t forget to let us know who you are and to say it’s for the Christmas Jumper Appeal) and we will do the rest.

Pay for full time workers in the lowest graded jobs including security guards, shelf fillers, hospital porters, kitchen and catering assistant jobs, waiters and waitresses and bar staff is still 12.6% below its value in 2007 says GMB. GMB is supporting Decent Jobs Week running from 15th to 21st December which is organized by the TUC with a series of events across England and Wales to raise awareness about workers in precarious and low paid jobs struggling to make ends meet.