GMB activist Ian Kemp from Parkgate Branch in Rotherham tells us why he will be backing Hate Crime Awareness Week. 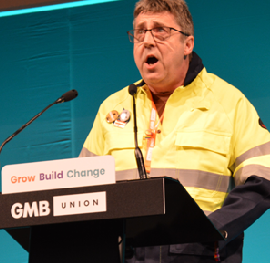 Between 9–16 October, I will be working alongside GMB colleagues for Hate Crime Awareness Week. As a white, straight male, I’ve never had to put up with abuse and discrimination because of my skin colour, sex or sexuality.

However, within the GMB equality strands, I have many friends who are subjected to hate, just for being themselves.

As we rattle through the 21st century, rather than improving, the situation is sadly getting worse.

From being confined to the extreme fringes of politics, hate is being normalised by mainstream politicians. We even have a Prime Minister who uses casual racist, sexist and homophobic language with impunity.

That’s why, as an ally to those suffering from hate crime, it’s important for me to support Hate Crime Awareness Week.

But what is Hate Crime Awareness Week? It is about standing alongside those who are suffering abuse and discrimination.  It’s about teaching people, especially our children, that there is an alternative to hate and that hate has no place in society.