In Defence Of Public Services

IN DEFENCE OF PUBLIC SERVICES

The Tory-Lib Dem cuts to public services are vindictive and wrong. The Coalition Government is attacking the services it took years of Labour investment to rebuild. This cannot go unchallenged.

GMB is a campaigning union and we must be at the forefront of the fight to defend our public services. There needs to be major workplace campaigns mounted across the country to stop the mindless destruction of jobs and services.  Our job is to speak to as many staff affected as possible, tell them GMB thinks these cuts are wrong and unfair and let them know what we plan to do about it where they work. 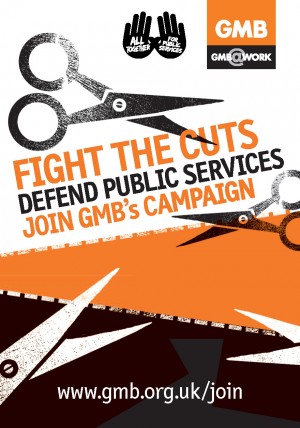 The proposed cuts are huge. Tory Chancellor George Osborne is planning to cut public spending by £99bn per year by 2015.This is deficit reduction taken to a wholly unnecessary extreme. The economy simply can’t cope.

The Tories and Lib Dems need to be reminded that building hospitals and schools didn’t cause the deficit, it was the bank crash. Public spending actually kept Britain a float during the worst downturn since the 1930s.The people who work in the public sector are not the culprits and they don’t deserve to take the fall.  We have a fight on our hands, nationally and locally. The budget decisions of every council, NHS trust, etc, are open to scrutiny and challenge. No employer under the illusion that cuts to vital services can be “pain free” should be left undisturbed.

Trade unions have an important role to play in exploring alternatives.  GMB’s success depends on our organising in the workplace. So this campaign in defence of public services has to involve generating workplace activity and organising non-members into GMB membership.

We do not have to stand alone in this fight.  GMB can campaign with service users, community groups and fellow trade unions in every instance where it’s in the interests of GMB members to do so.

This booklet is designed to help you organise and campaign against the cuts.  Please download a copy or contact Caroline Jones at regional office to have a hard copy mailed to you.