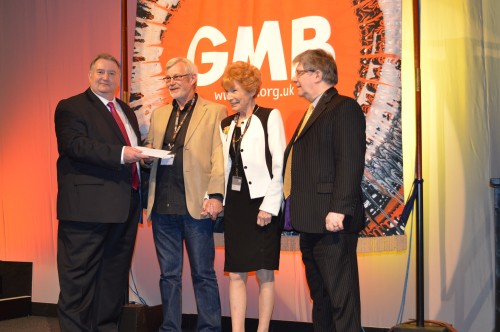 President Mary Turner opens Congress.  All 9 regions carried their banners into the conference hall followed by the new national banner which was designed by Ed Thorpe from Leeds Civic Branch.

A short video was shown to delegates on the work carried out across the regions over the last 12 months.

Tribute was paid to all those GMB officers, staff and activists who had passed away since Congress 2013. 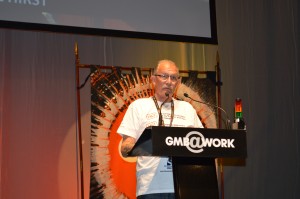 Michael Hirst from P45 Branch speaking on motion 6 which asked Conference to put forward that GMB offices should remain open over Christmas and New Year to assist our members should they require it. 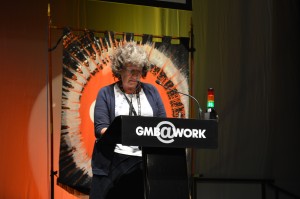 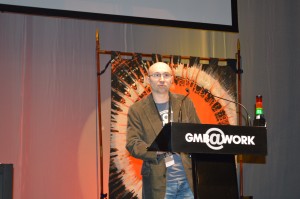 Bartlomiej Bardz moving Motion 9 which called on Conference to ask the CEC to initiate a regular (monthly) YouTube broadcast about GMB affairs.

We believe that such an initiative has many advantages:
- it gives a great opportunity to contact directly the general public without interference and censorship of the media
- it allows the growing in number internet users to find an alternative source of information and opinions
- it will make our sign, beliefs and finally faces more visible and recognizable to the people from inside and outside of the trade union movement
- it is cheap – does not involve a lot of investment and resources to keep it going

We recognise that possessing our own medium of mass communication is absolutely crucial these days to effectively perform duties as an active participant of the political life of the country. 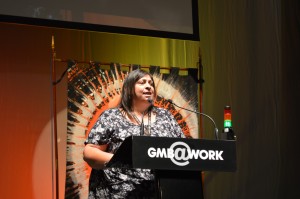 Following the adoption by Congress 2013 of the CEC Special Report ‘GMB Branches - A Future That Works’ a Branch Review Working Party was formed.  The Working Party was provided with comprehensive background information covering recruitment activity and branch participation in GMB democracy over a 5 years period from 2009 to 2013.

Full details of the special report will be available for download shortly.

This report is produced for endorsement by GMB Congress 2014 and to update Congress about what has happened since the CEC Special Report ‘GMB Woman’s Project’ was carried by Congress 2013 by the National Women’s Task Force which was formed after Congress 2013.

The Task Force will address issues that effect woman’s involvement throughout the GMB. There is still a pressing need for GMB to ensure that equality is included in all its organisations negotiations and representations.

Full details of the special report will be available for download shortly.

GMB’s new not for profit law firm opened for business and is officially launched at Congress. 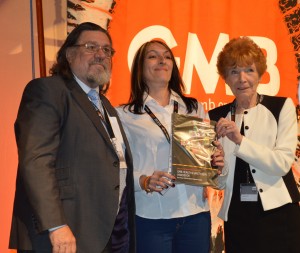 Amanda Burley from Leeds Civic Branch was runner up for this year’s Daniel Dennis Health & Safety Award.  Amanda has completed two H&S courses and is now undertaking an occupational H&S diploma.  In her workplace she holds regular risk assessment review meetings with management.  Recent work with management has seen lone working issues addressed.  Her work on health and safety in the workplace has helped to increase union membership. 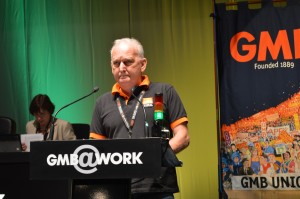 Jim Shield from York General Branch Speaking on Motion 163 on Migration - In Britain migrants make up 9 per cent of the population, which is the average for Europe. Britain has a smaller proportion of migrants and lower rates of net immigration than the US, Canada, Australia and several large European countries.  Migrants (including refugees) contribute to public services through their tax and national insurance contributions. They make a net contribution to the UK economy of £3 billion. Migrants are often young, healthy, and skilled, their use of public services is actually very limited.  Migrants help deliver many of our public services, working in the National Health Service, education and social care. It is a fact that the NHS could not function without migrant workers.  That, contrary to claims in the media, only 1.8 percent of social housing is occupied by those who have been in Britain less than five years. Research by the Equality and Human Rights Commission dispels the myth that immigrants jump the social housing waiting list. This found that 60 per cent were privately renting, 18 per cent were owner occupiers, and only 11 per cent were allocated social housing. The research found no evidence of abuse of the system nor of ‘queue jumping’.

Research commissioned by the Home Office concluded that there was no evidence to suggest that asylum seekers had detailed knowledge about the UK benefits system.  The number of asylum seekers that Britain receives is average for Europe, ranking 14th out of 27 when looking at asylum seekers per head of population. The UK receives fewer asylum applications than France, Germany, Italy, Sweden and Belgium. As of January 2012, the UN estimated that the number of refugees, pending asylum cases and stateless persons made up just 0.33 per cent of the population.  Asylum seekers do not have access to the mainstream benefit system. They receive £36.62 a week or £5.23 per day, which is 52 per cent of Jobseeker’s Allowance and well below the UK poverty line. Those who are refused asylum cannot access any benefits.

The economic crisis is the fault of bankers, politicians and bosses, not of immigrants. As the Mirror wrote in an editorial “Austerity, not migration, is why living standards and real wages are falling.”  Pandering to anti-immigrant rhetoric moves the political agenda to the right, giving confidence to racists, and helping to legitimise the views of far-right groups. It also helps to fuel the growth of UKIP. Migration is vital for the functioning of our society. With a rising elderly population and decreasing fertility rates, we will depend even more than we already do on migrants to provide tax revenues and services.  Racism against immigrants, including refugees and people seeking asylum, divides workers, hampering struggles to defend wages and conditions.

To produce material for members exposing right-wing myths about immigration and asylum seekers. To campaign to defend immigrants and asylum seekers, and to encourage them to join trade unions.
To support broad-based organisations campaigning against racism and scapegoating migrants. 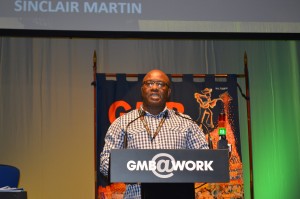 Sinclair Martin from Leeds Civic Branch Seconding Motion 27 which called upon Conference to provide relevant training in languages for stewards that have large numbers of migrant workers. This would enable shop stewards to recruit and retain these people in their workplaces to build an effective GMB organisation.

In her address, Glenis spoke of the recent Euro elections, the UKIP threat, Labour successes - key to those successes were the trade unions. 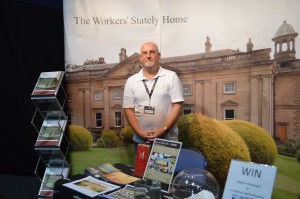 Every year Congress invites a number of exhibitors to Congress.  This year Wortley Hall has a stand.  Owned as a Co-operative since 1951 Wortley Hall cherishes its unique link with the trade unions and provides excellent conference, meeting and training facilities for up to 200 delegates.

Presentation To The Winners Of The Presidents Leadership Award for Equality

Farzana Jumma from Barnsley General Branch, is the branch equality officer, regional auditor and represents the GMB on the TUC Race Committee.  Farzana has worked on a number of initiatives including a domestic violence campaign, mental health in the workplace and female genital mutilation campaign.