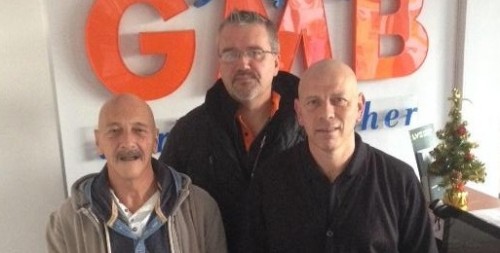 Green Co is a subcontractor for Veolia who in turn hold a contract awarded by Sheffield Council. GMB agreed to call off action and work with the Council as new proposals were put to Green Co but in November they rejected the Council’s proposals and sacked two GMB reps, Jim Rodgers and Gordon Parkes (right), who had organised a 2 hour walk out in between strikes to defend a disabled worker who was being bullied for taking part in industrial action.

Continuous strikes started in November and were suspended before Christmas to give the Council time to investigate and intervene.  The Council say they have no faith in Green Co to deliver the service but, sadly, little has happened to end the dispute. In recent weeks the company have escalated their attacks on their own workforce by scrapping the living wage and increasing the use of zero hours contracts, investing thousands of pounds in what they what they describe as, an army of temps ready to take the slots (jobs) of the GMB work-force.

The jobs of the entire workforce are all at threat: members were threatened with the sack when they gave notice to go out on strike again at Easter. The Council are continuing with their investigations into the actions of this appalling employer but in the meantime our reps and members are still sacked and without an income.

Will you donate to our fighting fund to help our members taking action and our reps who’ve been sacked? Click here to donate:http://www.greencofightingfund.com/fighting_fund.  If you’d like to make a donation by cheque, you can send it directly to Kalvinder Degun, GMB, Grove Hall, 60 College Grove Road, Wakefield, WF1 3RN (please make cheques payable to The GMB and write ‘ Green Co fighting fund’ on the reverse side). Please e-mail [email protected] for speaker requests at any meetings you may have where you would like to hear more about this campaign.

Back to Latest News